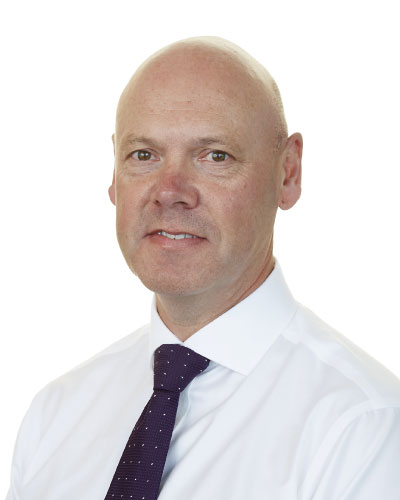 After graduating from UCW Aberystwyth with BSc Hons in Agricultural Botany, Simon went on to achieve a PhD from Imperial College London, researching the Sclerotinia Diseases of Arable Crops.

His career began in 1984 on a field trials station in Wiltshire, before moving to the Pathology department of the National Institute of Agricultural Botany, Cambridge.

In 1990 Simon took on a more commercial role as a crop protection specialist covering Cheshire and North Shropshire.

Since joining Wynnstay in 2000, he has been responsible for the company’s crop protection activities and also fulfils the roles of Maize Product Manager and Silage Additive Product Manager.

Last autumn saw a large proportion of winter cereal crops drilled later than the previous season, due to wet weather delaying operations. Subsequently, the window for pre-emergence herbicide applications may have been missed because ground conditions prevented sprayers travelling.

There was a delay in planting some cereal crops, particularly in the west, due to unfavourable weather, and by the time autumn drilling was completed, some crops were past the pre-em stage for herbicide applications.

For growers who were able to drill on time, wet weather in November may have meant ground conditions were unsuitable for spraying, also resulting in missed applications.

However, for growers who were unable to deliver pre-em herbicide applications, all is not lost and with careful planning, it is still possible to get on top of potential weed problems.

Some of the pre-em herbicides, alone or in a mixture, can still be effective when sprayed early post-em of cereal crops. However, while they can be applied after emergence of the crop, they must be applied before weeds begin to emerge.

For example, if the original plan was to use diflufenican (DFF) pre-em but this wasn’t possible, the chemical could still be applied post-em to control annual meadowgrass (AMG) provided that the weed hadn’t yet emerged.

Unfortunately, by this stage in the winter, we are already too late for this option as once AMG has emerged, DFF alone will not give acceptable levels of control.

However, there are still chemicals available that can be used to control AMG.

Products containing the active ingredients iodosulfuron and mesosulfuron, are effective for AMG control at this stage of the season, so it’s worth discussing the options with your Wynnstay agronomist. They can take into account crop safety and incorporate the new plans into an existing weed control programme.

My top tips for weed control:
- Know the field history and the weed spectrum

- Liaise with your Wynnstay agronomist to create a bespoke herbicide plan

- Be prepared to revert to plan B

For more advice, click here to find your local Arable & Forage Specialist.
This article can also be read in more detail in the Feb edition of Farmers Guardian!

Traditionally growers often reach for contact acting postemergence herbicides for spring cereals. However, by considering the use of pre-emergence residuals, weed control can often be improved, whilst at the same time reducing the total spent on sprays.

When it comes to producing high quality maize silage harvest timing is key, and the results of 2017 analyses suggest that some growers may have left it late.

The optimum time to harvest maize is when it reaches 32% dry matter (DM) but analyses of this year’s crop are showing a high proportion of silages at 38 to 40% DM.

The DM of maize alters very little during the ensiling process, so the DM% shown on silage analysis is usually the DM% of the crop at harvest. Given that maize dries down at a rate of 2% to 3% per week leading up to harvest, analyses indicate that some crops should have been chopped at least two to three weeks sooner.

Reflecting on the 2017 season, it seems many early maturing varieties had reached target DM by the first week of October.

Cobs took longer to ripen compared to 2016, due to the cooler weather in September, and cob maturity often coincided with very rapid stover senescence. This was because the weather conditions during ripening were ideal for eyespot and fusarium stem rot to develop rapidly.

Despite being ready, some crops were not harvested until much later. Weather and ground conditions were certainly responsible for at least some of the delays.

A situation developed where growers had over-mature maize crops, with much higher than normal eyespot and fusarium stem rot, both factors which predispose the crop to lodging and brackling. Then ex-hurricane Ophelia hit the country on 16 October causing lodging over wide areas.

The combination of this extreme weather event and an over-mature crop, led to a challenging harvest for some growers. Lodging and brackling became an issue, and this didn’t appear to be variety specific, with winds so strong the effects were indiscriminate.

While overall, the season appears to have been a success for the majority of growers, the problems experienced by some highlight the risks of delaying harvest.

With a lot of time, effort and money invested in growing the crop, growers want to ensure optimum feed value is realised and ensuring maize is harvested and clamped when it reaches target DM, is fundamental to achieving this.

While 2017 has not been a typical year, it highlights the importance of keeping your eye on the ball when crops are nearing maturity. When there’s a window of opportunity, it’s important to harvest the crop, and if anything, it’s better to harvest a little bit early than a little bit late.